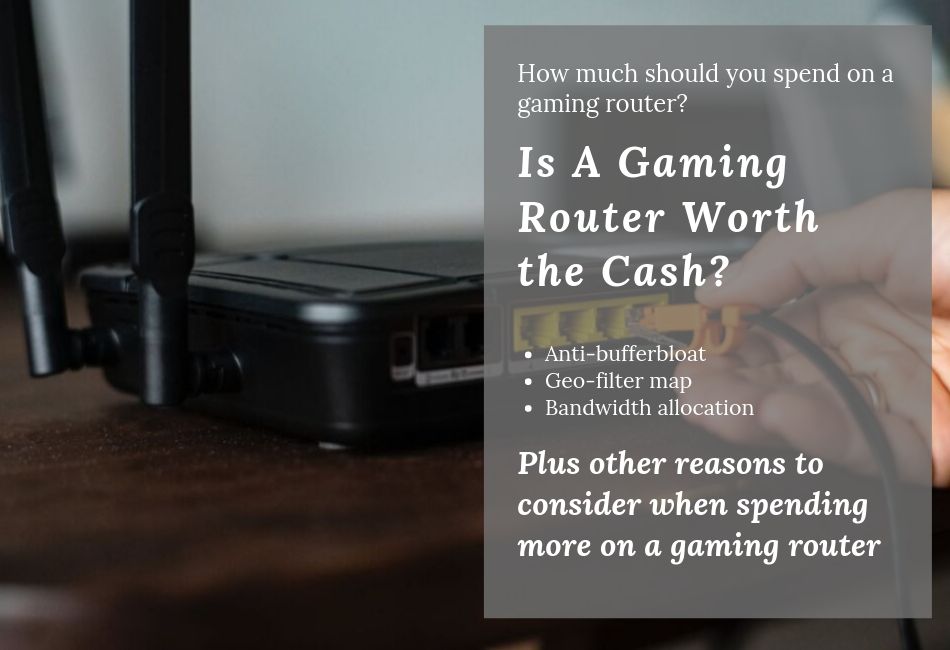 A good gaming router costs between $89 and $400. It covers up to 3.500 square feet and it can connect up to 20 devices. Since they handle up to 2.2Gbps, they can be used for gaming as well as for office needs.

The prices for a gaming router vary considerably. Most of them are not cheap, but they can offer high transfer speeds even for streaming as well as the capacity to connect many more wireless devices. This is why they are used in some offices as well as at home. But should you spend that much a router and what do you get in return?

The right answer depends on the intended use of the gaming router. Most PC gamers can already benefit from streaming prioritization. At the same time, they can handle their business with regular cables.

Bandwidth is the true game-changer when it comes to routers. This is one of the reasons why multiple gamers in the same house are among the few who can benefit from a gaming router. The same larger bandwidth is also suitable for offices where there are many computers connected to the same router.

Bufferbloat is the traffic jam of gaming routers. In the past, it used to be fixed with QoS by prioritizing certain downloads. But today, this can be adjusted directly through the gaming router itself. If you have demanding devices on the router, it will create a lag but luckily, modern gaming routers can come with functions such as the anti-bufferbloat which lets you control both the upload and the download speed limit.

If you’re playing online games on your PC or even on your Xbox, you will be automatically paired with gamers from around the world. This can create lag issues as well. A gaming router can include a geo-filter map. This allows you to control the extent to which you can be connected with people around the world. By limiting the search to people up to a few thousand miles away, your chances of lag-free gaming improve dramatically.

If you’re still experiencing bandwidth problems, a gaming router might be able to improve your issue slightly. Bandwidth allocation allows you to set the percentage of bandwidth per given device. It means you have the freedom to set which of the connected devices is prioritized. Even in an office space, this can be crucial as not all employees need the same download and upload speeds. Those in multimedia, for example, will be looking towards maximum bandwidth.

One head to head comparison of cheap and expensive gaming routers

When going for the most expensive gaming router, you probably have serious streaming needs. From multiple devices to the capacity of playing any game without interruptions, there are a few unique benefits to expect. However, it is only fair to see a comparison between a typically affordable gaming router and a more expensive alternative to get a better perspective if it is truly how much you want to spend.

Do you have to pay monthly for a gaming router?

There are no monthly charges you have to pay with your gaming router. However, as seen in the features listed on the gaming routers above, certain safety features such as anti-viruses might be paid separately every month.

Does a gaming router help at all?

A gaming router has better processors and more RAM. They are faster and the best solutions for internet speed and streaming. They work like a knife on butter in an office location.

How much you spend on a gaming router is solely defined by your real needs. If you’re the sole user of a home network, you might not need all the functionalities of such a router. On the other hand, if there are multiple users and even if you plan to use better bandwidth allocation at the office, a gaming router can do wonders.

In the end, a gaming router also looks way better than all other routers. Without any particular need for them to look as aggressive as they do, they can spice up the electronics at the office with their futuristic designs. As seen above, there are differences between cheap and feature-packed gaming routers. For most users, they might not be worth the extra price.

For others, such as those who like the Geo-filter maps which can improve games such as shooters, the investment is worth it. But in an office, a gaming router can add extra controls which are hard to match for most other entry-level routers without any added software.