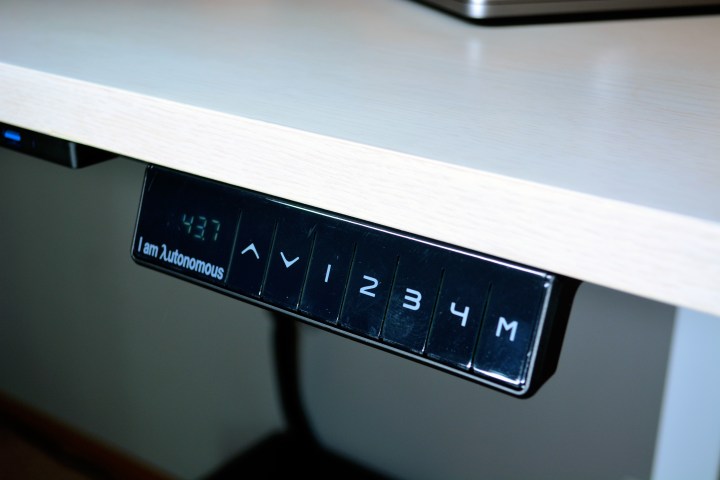 Made to favor standing instead of sitting, the Autonomous SmartDesk 2 Business Edition is made for the active worker. Available in different top colors, it is probably the most modern design in its class. Backed by a 5-year warranty and monthly payments financing, it is probably among the best solutions for standing office work.

When it comes to the world of standing desks, there are new names on the block. This Autonomous SmartDesk 2 Business Edition review looks at the standing desk challenging the likes of the Fully Jarvis or the Uplift’s designs.

As with all new standing desks, expectations are high. The SmartDesk 2 Business Edition is the best-selling design from the manufacturer. But apart from its sales and figures, it has a special feeling which makes users feel at home right at the workplace.

There is a special feel about the SmartDesk 2 which is closely tied to the way it is finished. Its top is actually made to look very sleek and modern. Its black and white versions make it look very distinct. A sort of minimalism which would have been seen at Ikea and which is only partly present at Fully.

When it comes to reviewing the SmartDesk 2 Business Edition, it is wise to understand that Autonomous does not have hundreds of products. As a result, the manufacturer places more emphasis on its limited products range. More marketing is placed behind these products as well.

Over time, Autonomous has grown out of the office furniture market. The brand now offers to sleep, traveling and lifestyle products. However, if there is one product which encompasses the manufacturer’s creed, that’s the SmartDesk 2.

The Autonomous SmartDesk 2 is one of the leading names in the affordable standing desk market. It costs nearly half as much as some of the popular standing desks users can find.

It makes it one of the more attractive options, especially when it comes to a large office which needs lots of them. The savings can be considerable. Of course, it might not come with the fastest height-adjustable motor, but the standing desk is still one of the most affordable designs users can hope for.

There are other unique advantages to the desk as well. Its improved weight capacity over the Home Version means it is truly made for all professionals. From those only working with a laptop to those who need support for multiple monitors, there is plenty of space for users to enjoy the latest tech and all the paperwork of a general working day.

The major strengths of the Autonomous SmartDesk 2 Business Edition

Reviewing the Autonomous SmartDesk 2 Business Edition cannot be done without separating its major strengths. The standing desk might not be as complex as many of its rivals, but it certainly is one of the most intriguing designs in its class.

It stands as one of the designs made for the user. It is not common to see new brands offering such simplicity, as most new names on the standing desk market aim to stand out by all means. But Autonomous had the right mindset.

Stripping all features apart, the standing posture at work remains the biggest asset of the SmartDesk 3. Without promising anything else such as ergonomics, it manages to support users of various heights. Its height range varies from just below 30 inches to just above 50 inches.

This means that the height can even be different even if the person using the same is still the same. For example, writing at the desk might require a lower posture than simply browsing the web. However, the height adjustability means that the desk offers the same level of freedom to users of various heights, which makes it perfect for busy offices.

There are plenty of instances where users take up standing desks for the wrong reasons. There might not be as many good reasons to consider the SmartDesk 2 compared to its posture and health benefits. It has been already proven that better posture is achievable with standing desks.

In these conditions, the Autonomous SmartDesk 2 Business Edition review acknowledges there are plenty of benefits to standing. Of course, these benefits are not necessarily attributed to the SmartDesk 2 only, but as it can be one of the first standing desks for many workers, it is certainly among the designs easy to recognize as revolutionary when coming from fixed alternatives.

As seen in the studies above, one of the direct benefits of standing at work, even if not for an entire shift, comes with higher energy levels. Avoiding sitting for long hours automatically comes with better energy levels. This goes both for the state of mind an how the body feels.

Most SmartDesk 2 user reviews also show that people are generally happy with the extra energy level. Of course, they will not run marathons after a long day of sitting, but users will be able to actually enjoy a bit more energy both through the day and after the workday.

There are other benefits to consider tied to energy as well. One of them can be tied with the mood in the office space, which has been declining over the years. It might be difficult to prove this, but having a look at how some employees are now happier with shorter work days or how the workspace has changed from dull, just a few decades ago, to relaxing and inviting in the present speaks for itself.

Those who’ve read the news just 10-15 years ago remember the articles praising Google and its modern workspace. In its headquarters, employees were able to have a custom workspace which offered them plenty of freedom. Such articles are not published anymore not because this is not happening in the workplace, but precisely because this has now become the norm. This is where the SmartDesk 2 can be part of such a custom workspace.

At the end of the day, all work needs to be done. Measuring productivity can be difficult. This is why users have to trust reviews which claim higher productivity levels. However, it would prove childish to simply purchase the Autonomous Smart Desk 2 Business Edition in the hope of getting work done. This is a benefit and not necessarily as considerable as many would think.

In many industries, enjoying better creativity is crucial. For most people, it can also be a matter of improved focus. Simply switching from sitting to standing can create a physical difference which can then be translated into a more work-like mindset or even as a reset action.

Another distinct advantage of the SmartDesk 2 comes with its ease of use. Unlike many other standing desks, it does not complicate things too much. There are only a few buttons which the user needs to control. Up and down buttons are attributed to height adjustability. 4 height settings memory buttons are used as well.

Of course, the standing desk is also easy to install. But being made for the workplace, it is less likely to be actually installed by the worker and rather by a handyman installing multiple standing desks at once. However, even those with no standing desk installation experience can consider it themselves as the installation process is quite simple, even simpler than that of other standing desks.

Some weaknesses of the standing desk

Since no standing desk is perfect, the Autonomous SmartDesk 2 has to go through its judgment as well. While there are no major drawbacks, a few areas could be improved or at least users need to be made aware of them.

Autonomous sells cable trays separately. This is not the case with other standing desk brands. Users need to know that the more cable they have dangling from the standing desk, the more cluttered and busy the desk will look, which defeats the approach of simplicity. It is why users with multiple monitors and even other electronics with cables are recommended to purchase the cable tray as well.

Another possible drawback to consider comes with the slippery top. All reviewers mention that there is a nice smooth finish on the top. But this also means coffee or tea cups can easily slide on the top and even lead to liquid spills. This is why coasters are highly recommended to prevent possible coffee accidents. However, the good news is that the various SmartDesk 2 tops are actually spill-resistant.

Going back to the basics of the Autonomous SmartDesk 2 review, it proves important to understand that the standing desk is made for those who want to be more active at work. A minority of users might not actually seek to become more active.

They will find no real benefits to upgrading to the SmartDesk 2. It is why it’s actually important to make a conscious decision on the reasons why such a desk would be useful in the first place. It is when people put their motivation behind bettering their posture that the long process can begin.

The Autonomous SmartDesk 2 Business edition vs. the Home Edition

The Fully Jarvis standing desk is a direct competitor to the Autonomous SmartDesk 2. It has a higher weight capacity at 348lbs. However, Jarvis is also more expensive. Both standing desks have similar controls. They are made with 4 memory height settings, which prove useful for different height preferences and even for different users.

However, both standing desks sell cable management accessories separately. The main difference is given in price, where the Autonomous SmartDesk 2 Business Edition proves better suited for those with tight budgets.

There might be different reasons why users go towards the Autonomous SmartDesk 2 Business Edition. Reading its reviews automatically shows how some workers chose it for its sleek design which others for its price.

This is why it’s actually the standing desk which offers the same health benefits as other more expensive standing desks which might come with more bells and whistles, but which don’t have better benefits on posture and health.

If there are other reasons to consider the Autonomous SmartDesk 2, they are purely marketing. Users should think about this simple standing desk as the first solution towards better posture and its linked benefits.

Of course, it is a solution which costs more than a fixed desk. However, it is still a standing desk which is more affordable than others. Some reviewers even value the monthly payment system which makes it more financially viable.

What do you believe? Is it worth spending more on another standing desk or is the Autonomous SmartDesk 2 Business Edition enough for the type of work you do?