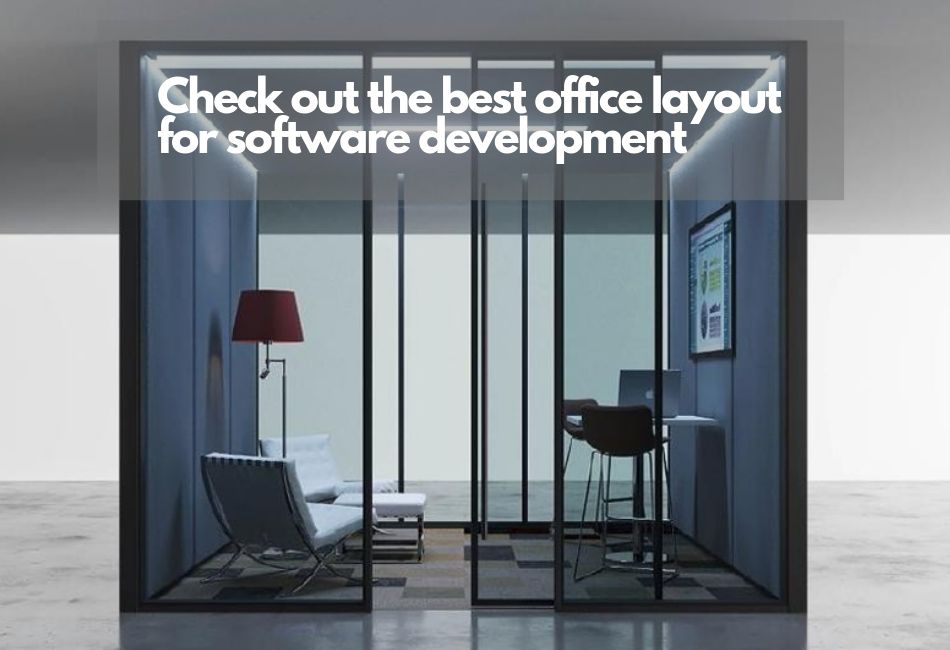 The best office layout for software development is based on productivity and not many distractions. Developers need 125 sq.ft. in cubicles. Open space layouts require the same square feet. Conference rooms can accommodate up to 20 software developers based on a layout of 15 X 25 sq ft.

These terms are general and they can vary considerably. However, modern office layouts are linear and they are made according to well-defined standards. Depending on the available space, software development office layouts could be based on the following models.

Employers love cubicles because they are easy to assemble and they are cheap to set up. However, they can feel the isolation for some developers.

Clusters are similar to cubicles but without the physical barriers. They are great for communication and teamwork on the same project.

Open spaces are the norm for many IT companies. They improve communication between employees and they are cheap to set up.

Developers who are constantly on the phone with clients need their own private space. The private room office layout is not dead and it’s only going to get stronger.

Co-working spaces are among the newer options for software developers with a higher sense of freedom. Freelancers find it particularly appealing.

Why do software developers need to work in open spaces and not on their own?

Apart from working in clusters, software developers might even be facing an unexpected reaction to open space working. This office layout has already been proven to reduce face to face interaction and replace it with instant messaging communication.

This being said, there are a few specific and a few general tips which can help the office atmosphere of a software development team.

A few technical solutions require a bit of extra room in an office layout of software developers. Python, Ruby or JavaScript lines can often be presented and analyzed via a projector, for learning purposes. The same can apply for any other presentation or study cases. A projector should ideally be placed in a conference room. Office layouts with no conference room should place the projector at an angle in which it can be viewed from the cluster layout the best.

Other gear which needs to be accessible includes printers. Most developers rarely use them and this is why a single wireless printer is connected to all computers and it should be part of a layout in which it is placed in a common area.

Working as a freelance software developer often means working from home is a reality. In this case, the options for the best office layout are limited. There is not as much space as on commercial premises and making the most out of small spaces is a must.

Instead of listing the obvious elements needed in a home office for developers, we’re only going to look at a few top solutions to be used at home for maximum productivity, which might not be as obvious.

Whiteboards can serve as real physic reminders and organizer. Simply staying organized and knowing which project is due on a certain week and having a list of prioritized clients can help a developer considerably. Unlike electronic reminders, anything written on a whiteboard is visible at all times.

A stick-on desktop whiteboard is a complementary solution to work on something more urgent, such as a coding problem. Writing it down can help visualize the problem better. Such whiteboards with a stick-on profile can be placed directly on the desk. At the same time, these boards can be wiped quickly.

If it sounds like a lot of work, just look at why productivity and satisfaction are impacted by the office layout

There are a few general points to make when it comes to office layout and software development. Luckily, we have another study to look at and its findings show the various benefits and the various drawbacks of the open office layout style, which is now popular with many companies.

According to a 2016 study on office design and its impact on teamwork, there are a few conclusions which can be at the root of any new layout.

One of the benefits of working in an office space where everybody is not together is that developers can increase their cooperation with other team members. In terms of immediate productivity, this most not mean much. However, it can still help them better understand each project and product as a whole, making an effort to deliver a result which all teams are striving for.

An open office layout where there are no clusters can also increase the chances of meeting colleagues from other teams. This has been shown to happen in this study and many can see this as a considerable advantage.

All the subjects of the study said that the larger the physical distance from colleagues was, the more difficult it was to relate to them. Values such as communication, cooperation, and even trust seemed to be affected the most.

As a result, those who might plan offices for developers working on the same project should find the best methods to keep team members closer.

16% of the study’s subjects said that not being able to sit closers to their colleagues led to poorer cooperation. Even communication increases via messaging and via phone calls, it is still not enough to replace actual face to face communication.

While there is an increasing number of tips on how to improve an office layout, the information might still not be conclusive the real-world situations. The 125 square feet cubicles can mean nothing in real life if they are not backed by some type of benefits in terms of how developers work and in terms of how they feel.

Most studies in the field show these two directions cannot be separated. But are they true in your case? Let us know in the comments below. Before leaving this page, feel free to have a look at a few best office layouts for software developers to get some ideas of what is being used at this moment.