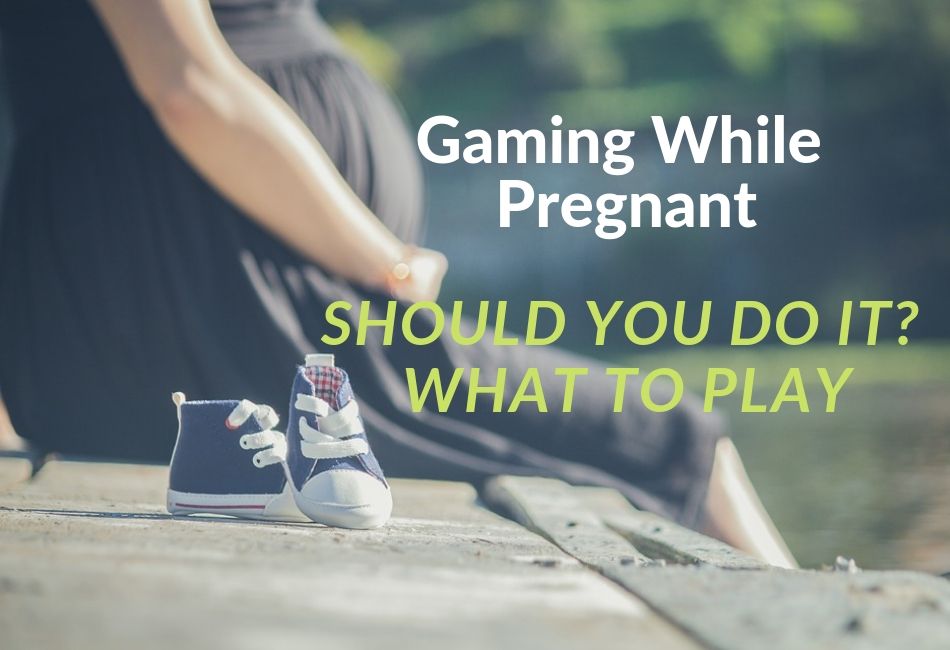 Gaming while pregnant is not considered unsafe. However, some of the best games during pregnancy are those which gamers are already familiar with. Skyrim is a popular choice but portable games such as Nintendo’s Unravel 2 or Tetris 99.

Selecting the games which are a bit more relaxing is crucial for pregnancy, even if not necessarily mandatory. If you want to see a full list of recommended games for pregnancy, scroll to the final sections of this article. If you want to learn more about gaming while pregnant and its scientific risks and myths, follow through as we take a closer look at what we know so far.

Gaming while pregnant – is it possible? Here’s what science says

Now, there are a few who argue that playing video games during pregnancy is harmful to the baby. However, there is no direct scientific proof to confirm this theory. What we know so far is that radiation from smartphones is harmful, but maybe not to the extent to which many imagine. One of the bigger concerns which often flies under the radar with pregnancy gaming is losing sleep.

We’ve all been there where we skip hours and hours of sleep just to get to that next level. However, this is dangerous for most, especially if done on longer periods and especially for pregnant women.

A 2015 study shows that losing sleep is potential harmful for the baby. At the same time, some medication such as benzodiazepines may be harmful as well. Ideally, the expecting mum would get as much sleep as possible. At the same time, this study confirms that many pregnant women experience loss of sleep.

At least 64% of pregnant women go to periods where they can’t sleep. Now, building on this study, its highly unlikely playing games will actually help this issue. This means that some pregnant women should not be playing games on the nights they might fall asleep too quickly.

Of course, there are many variables such as SAR level of the phone or personal variations such as employment, education, family relationships, history of labor and history of abortions to be considered. Still, it would be wise to limit all types of radiation sources in the home of pregnant women as even this study says further research is needed to go in depth on all variables.

Take out the stress-inducing games

Playing Dark Souls or the latest Call of Duty is fun and it can take hours. But some mums argues FPS games might not be the best choice during pregnancy. However, habits have an important role when it comes to relaxation. If you’ve played such games before, you would find it relaxing to go back to them on the grounds of familiarity.

Playing a Plague Tale, Pacify or any other types of horror games is a different story as well. For some, such horror games might increase anxiety, stress and even blood pressure. It might even make women lose sleep, which is one of the most important aspects of pregnancy, as seen above.

Types of games to play while pregnant

One of the best methods to ensure you have a fun time while playing is to give portable games another try. Even playing an old Nintendo can be a great source of fun, relaxation or a method to make time pass faster when stuck indoors.

Many games such as Tetris 99 could keep you busy for hours. Such games are true classics and even when you think it’s game over, you can come back and save the day staying interested in playing for hours.

The Super Mario Party series is another great choice for pregnant women. The fun game is now a true classic and its latest version is the best one out for a long time. Prepare for a fun adventure with Mario and his friends.

Okami is another great action-packed game. It is similar to Zelda and it can be one of the games you play for hours without any nightmares or anxiety attacks to worry about.

Hollow Night is a fantastic game which looks beautiful and refined. It is fun to play for hours and it can be one of the best options to keep you constantly hooked.

As a bonus, you can play any of the A Game Operate now games. You may even pretend you’re giving birth with its fairly simple simulator.

Skyrim, Zelda and League of Legends are also among the popular games many prefer. They remain true options for endless hours of fun.

How to sit when playing games pregnant

When it comes to the right position, nothing can compare to an adjustable folding bed which can sit in the lounge. Pregnant women can play and sleep in such a chair. If you’re a fan of sitting on your belly, you will need to get creative. This is why a solution such as the supportive pregnancy pillows with a hole for the bump is a great choice when playing Nintendo games.

Gaming while pregnant is fun and it can be one of the few options to stay entertained while indoors. There are not too many reasons to fear it, especially if you’re not losing sleep in the process. As seen in the studies above, it is not necessarily the case that gaming is bad, but it is what it can bring with it such as long sleepless nights which can harm your pregnancy.

If you allocate sufficient time for resting, you can play most games which you are already playing at the moment. Furthermore, you can take the opportunity to play portable games as these are the options which allow you to lie down and sit in a more comfortable position for your bump.