Based on the Processing the Head Direction Cell A Review and Commentary 1996 study, many believe that office desks facing West are bad for productivity.

These conclusions are actually drawn from the study above, but they have little real scientific data application to office desk orientation.

If your office is facing West, you might be limiting your productivity and positive energy. This is a superstition, belief or something which has actually been studied. The study above mentions how animals need a sense of direction when navigating. But this has nothing to do with the actual orientation towards the West. In this article, we discuss why office desk positioning is important, but for other reasons than many would expect.

According to Vastu principles, the cardinal directions are responsible for good and bad energy. It is believed that the North and the East are positive, providing good energy. Everybody is encouraged to face this direction from childhood. When working, people are recommended to face this direction. This is why office desk facing West might be in conflict with these principles. 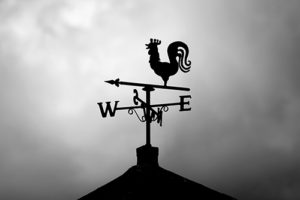 According to the law of opposites, for every positive, there is a negative. The old Yin and Yang. This is why the West and the South are considered directions which drain the energy while working at the desk. It is why it is not common for workers to be facing these directions while following these principles.

According to Feng Shui principles, each person has good and bad points, 4 and 4 to be exact. This is why these directional cardinal points are actually to be tested. It is rare for Feng Shui principles’ abiders to place a desk so that they face a wall. However, the direction is the most important event here. Even if they are facing a wall, it is crucial for them to face the right direction first.

According to the same principles, good directions need to be tested out. All office desks should actually be tested, especially when there is a type of blockage such as a brick wall. Feng Shui fans also know certain objects can improve certain areas of well-being and they can be chosen to complement the direction the desk is facing.

Office desk is seen as barriers

It is office desks which sit in-between people which may have a negative effect on the perception of empathy, according to psychology. Unlike the other principles seen above, the direction of the office desk is important. But science tells us it is how people use these desk and the non-verbal communication that can impact the way a person feels and possibly their productivity.

If two co-workers are divided by a large office desk, it is highly likely they feel less empathic, as shown by research data. Even if an office desk would not be facing West, this principle would still apply. However, a few other facts could be more important than the orientation and the spacing between co-workers.

Busy offices tend to create a lot of resentment for those trying to focus. There are a few things which can be done to limit this. First of all, the desk should be facing a position where the worker is seen by the colleagues. It’s less likely to see any type of interruption when the coworkers know how busy a person is. Having the desk placed behind a door with no visibility is a definite method of impeding this from happening.

There’s nothing wrong with facing West from a scientific perspective. Even more, an office desk facing West and offering window views can go far. It has been shown that looking out into the distance from time to time is beneficial to the eyes. This is why it can be important to find the best position for the desk in terms of quietness and long-distance viewing rather than basing the choice on cardinal points.

It can be said that office desks facing West being the cause of bad energies is a myth. The only valid point is that there is no direct sunlight getting into the office. Even so, facing East would have less of an influence for productivity and energy levels.

As shown in other posts, it is the activity level at the office and at the desk which is responsible with higher energy levels. The good news is most of these changes can be made regardless of the desk is facing West or not.